These creative wall mounted display cases have been made for various jewelry and optical stores in the USA and Canada. Take a look at the photo’s below and if interested call our team of specialist and they will gladly help you.

These counters are sold all over the USA and Canada and the last 2 years we have seen explosive growth in pedestal and counter display cabinets.

Below you will see a few of our more recent jewelry counter display cases we have made for various customers in Texas, Georgia, Florida and California.

GameStop Corp. (NYSE: GME) will grow earnings by 3 to 5 percent over the next four years with its existing and new lines of business, CEO Paul Raines told the investment community on Thursday.

Raines and other GameStop executives spoke to investors and analysts at the company’s 2016 Investor Day, held at the Gaylord Texan Resort and Convention Center. The Grapevine company discussed growing its core competency – physical video game sales– as well as diversification plans, including its expansion into electronics and collectibles sales.

We broke down three takeaways from the event:

A jewellery exhibition that celebrates some of Canada’s most notable women will be making a stop in Orillia, Ont., next month.

“I created ‘Homage’ to celebrate and honour Canadian women, past and present,” Stuart says. “As a contemporary jewellery artist, I have used the familiar form of the necklace to explore history from a fresh perspective. This exhibition connects the arts with business, culture, and heritage.

“Necklaces are archetypal symbols of power and importance, and are a fitting vehicle to represent seminal women in Canadian history. The choices of materials for each necklace are as varied as the women themselves, each infused with meaning and significance.”

‘Homage’ runs from July 23 to Sept. 25 at the Orillia Museum of Art & History. The museum is home to thousands of artifacts from Orillia and its surrounding area. Sketched portraits of each of the women by Susan Benson accompany the neckpieces.

“The exhibition has an obvious educational component, as it offers particular insight into Canadian history from an atypical vantage point,” Stuart says. “Patrons of all ages comment that, visiting the exhibition, they are fascinated not only with learning about many of the women, but also seeing the diversity of the pieces.”

Jewellery consumer and trade shows provide a great forum to interact with clients and get your merchandise out there to potential buyers.

Yet, they may also be painting a target on your back. Exhibitors who attend them are prime candidates to becoming the victims they never thought they would be—right at the very booth where they feel safe and secure.

According to John Lamont, director of loss prevention for Jewellers Vigilance Canada (JVC), most reported thefts happen when exhibitors travel to and from jewellery shows. However, he acknowledges exhibitors inside must still be on their guard.

Once jewellers have arrived at the heavily secured site hosting the show, shown their identification, checked in, and set up their lines, the possibility of theft must never be stored on the back burner.

Jewelers Mutual Insurance Co., explains there are multiple opportunities for thieves to steal merchandise from the comfy confines of a booth. Opportunity theft, distractions, cheque fraud, switches, and even after-hour theft committed by security guards and show workers are all possibilities that are not unheard of. Robbery gangs are also known for staking out shows and working their way inside, says David Sexton, the insurer’s vice-president of loss prevention.

“One of the main things jewellers have to get over is that just because you are at a show doesn’t mean you can drop your guard, or that you can behave any differently than you would in your store or office.” Specifically, he says exhibitors should stick to the same procedures when it comes to showing merchandise and handling showcase keys. In addition, care must be given to limiting the number of people behind the counter area, and making everyone working at the booth accountable, he adds.

Sexton offers several suggestions to help exhibitors protect themselves and to appear less vulnerable as a potential victim.

Be familiar with your insurance coverage. It’s usually understood a jeweller has sufficient coverage when travelling to and from a trade show, but what about ‘while at’ coverage, like when inside the building. Sexton says underwriters evaluate how safe and secure the event is, basing the policy on those details.

In addition, every jeweller must consider the event’s details carefully. Who is sponsoring the show? Who is going to be allowed into the hall? What protection/security measures will be in place? These points are necessary to ensure you have the right coverage.

“For jewellery shows, there are protocols and procedures in place, and the jeweller can review those to determine their comfort level with what’s going on,” Sexton says.

Have sufficient staff at all times. Sexton advises at least two associates should be in a booth whenever merchandise is on display. “If you are only going to have one person on their own, however, restrict yourself to working with one customer at a time,” he adds.

When there is an incident, both Lamont and Sexton say there is usually some sort of commotion or distraction going on, whether it is set in motion by the thieves themselves or simply used to their advantage. Several people can be asking questions at the same time, or an associate could be conducting a sale, or writing up an order. It can be extremely difficult to multi-task and keep track of what’s going on—proper staffing is crucial.

Never let your guard down. Remember, the potential risks you face at your store or office can follow you directly to your booth.

Regardless of what security you had to go through to get inside the show, merchandise can disappear from display cases in seconds. Remember to use the same procedures you normally would.

“[Jewellers] deal with clients at a show the same way they would at a store, so sound security procedures as far as showing the jewellery, taking it out, and replacing it are all key things to maintain,” Sexton says.

Pay attention to your customers. Be aware of who is approaching you, who is hanging around your showcase area, and who is trying to get your attention.

“Jewellers need to make eye contact with the customer, and really read them,” Sexton explains. “Are they there to check out how weak your defenses are, or are they actually interested in looking at product?”

Would-be thieves fabricate, steal, and pick up discarded badges before they come into shows, appearing to be legitimate, pre-qualified retailers. Sexton cautions to not rely on that—someone having the proper credentials should not give you permission to drop your defences.

No matter how tempting, never turn your back on the person you’re serving, let them handle merchandise on their own, or leave jewellery in a showcase unattended. By showing more than one item at a time, there is the potential for a grab and run, or even items being switched with fakes. Thieves use distraction techniques like causing a commotion where salespeople can actually forget what they brought out.

Make sure display cases have uniquely keyed locks. According to Jewelers Mutual, some vendors who provide showcases to jewellery shows use universally operated key locks, meaning exhibitors may be able to unlock one another’s cases. Sexton suggests exhibitors ask what kind of cases are going to be provided, and whether or not they have unique key locks. If not, consider arranging to either bring your own cases or lease ones that can only be opened with a unique set of keys.

You May Also Like Modeliamo: Standing up to overseas manufacturing

Cases where the door in the back flips up can offer better protection, since it’s more difficult for people to get in without being observed, Sexton notes. In addition, he says locks that don’t allow the key to be removed unless the case is locked are one option to consider. Always inspect cases at the start of a show and throughout to ensure they have not been tampered with. Thieves have been known the cut the silicone along the edge of some older display cases, lifting the glass, and removing the items. They may even tamper with cases one day, and return at a later time to steal.

Re-examine items before returning them to the showcase. Keep all jewellery trays completely filled with goods or markers. Don’t let non-employees behind the case, and if anyone is causing a commotion or loud disagreement, be on alert and call security for assistance.

“Jewellers exhibiting at a show are prime targets for theft. The threat of robbery gangs is not an overstatement,” says Sexton. “It is very, very real regardless of the perceived sense of security a show can create.”

He emphasizes these thieves are very good at what they do, travelling from show to show in search of new victims.

Although a traditional method of doing business, exhibiting at trade shows does not come without its risks. Some jewellers have been put out of business due to losses of theft, Lamont says.

Yet, as long as the jeweller pays attention and consistently follows basic sound security precautions, Sexton says exhibitors can conduct business and reduce exposure to theft.

“If they can remember this and inspire their associates to follow their example, there is no reason they cannot thoroughly and safely enjoy their ‘while at’ jewellery trade show and exhibition experience.”

Stacey Escott is a journalist and freelance writer based in Hamilton, Ont. She covers various topics ranging from breaking news to community issues to engaging personal stories. Escott studied journalism at Sheridan College and enjoys expanding her body of work through different writing styles and new and interesting subjects.

Jewelry counters and pedestal display cases are among the most popular display cabinets made for the diamond and jewelry industry.

We are well known for making some incredible designs and we are always proud to show off our work. 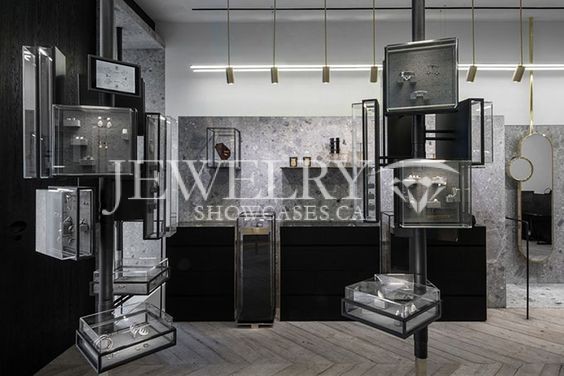 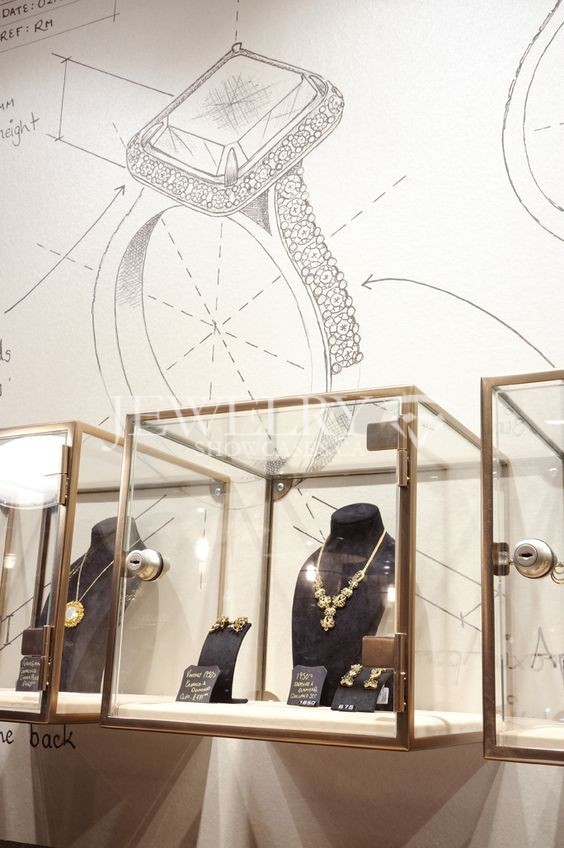 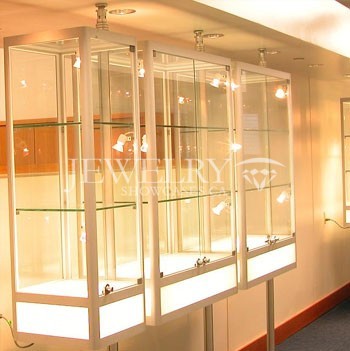 What do you think about our latest work?  What or if would you change about these designs?  We welcome any suggestions from our customers and friends around the world. 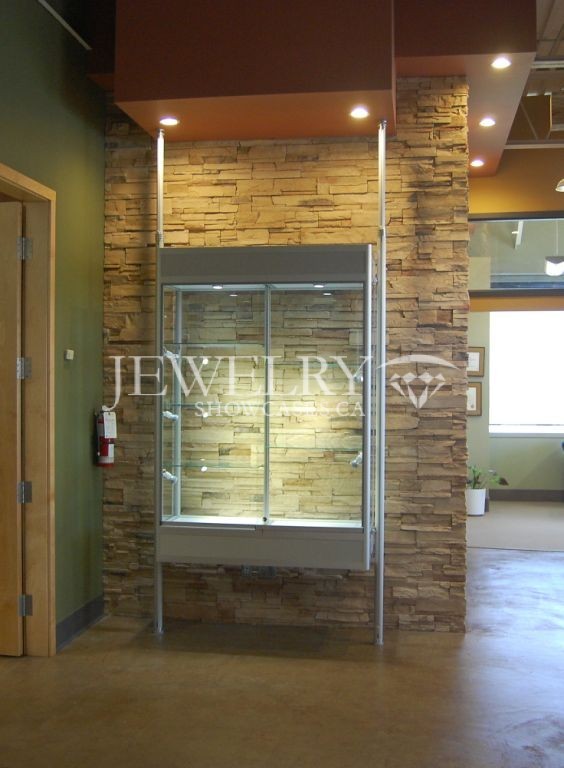 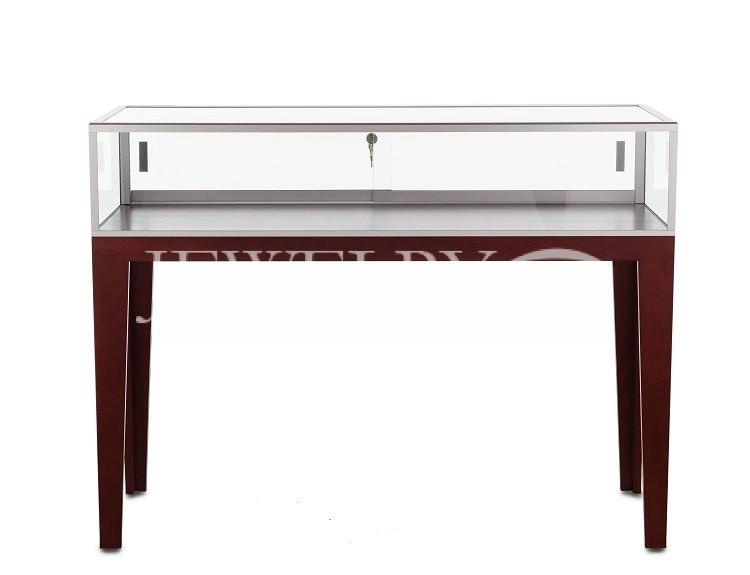 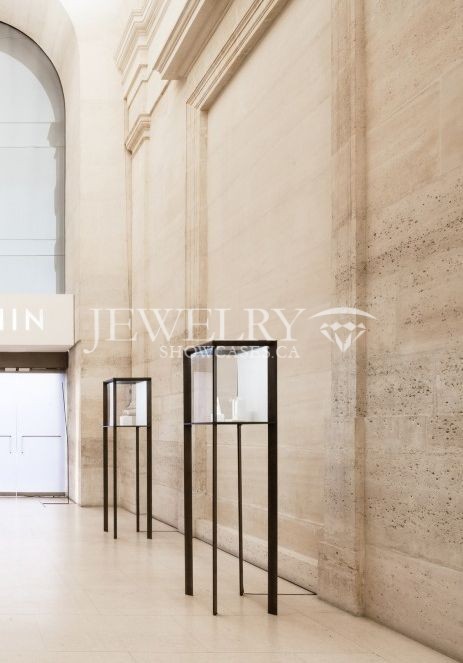 We are probably the only company in the USA or Canada that has over 127 wall upright display cases for jewelry and various other retail business.

Our classic selection of these free standing display cases is made out of aluminum or steal extrusion and our standard line uses various wood finishes.

For more information please visit us online at 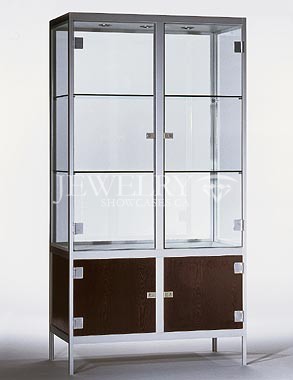 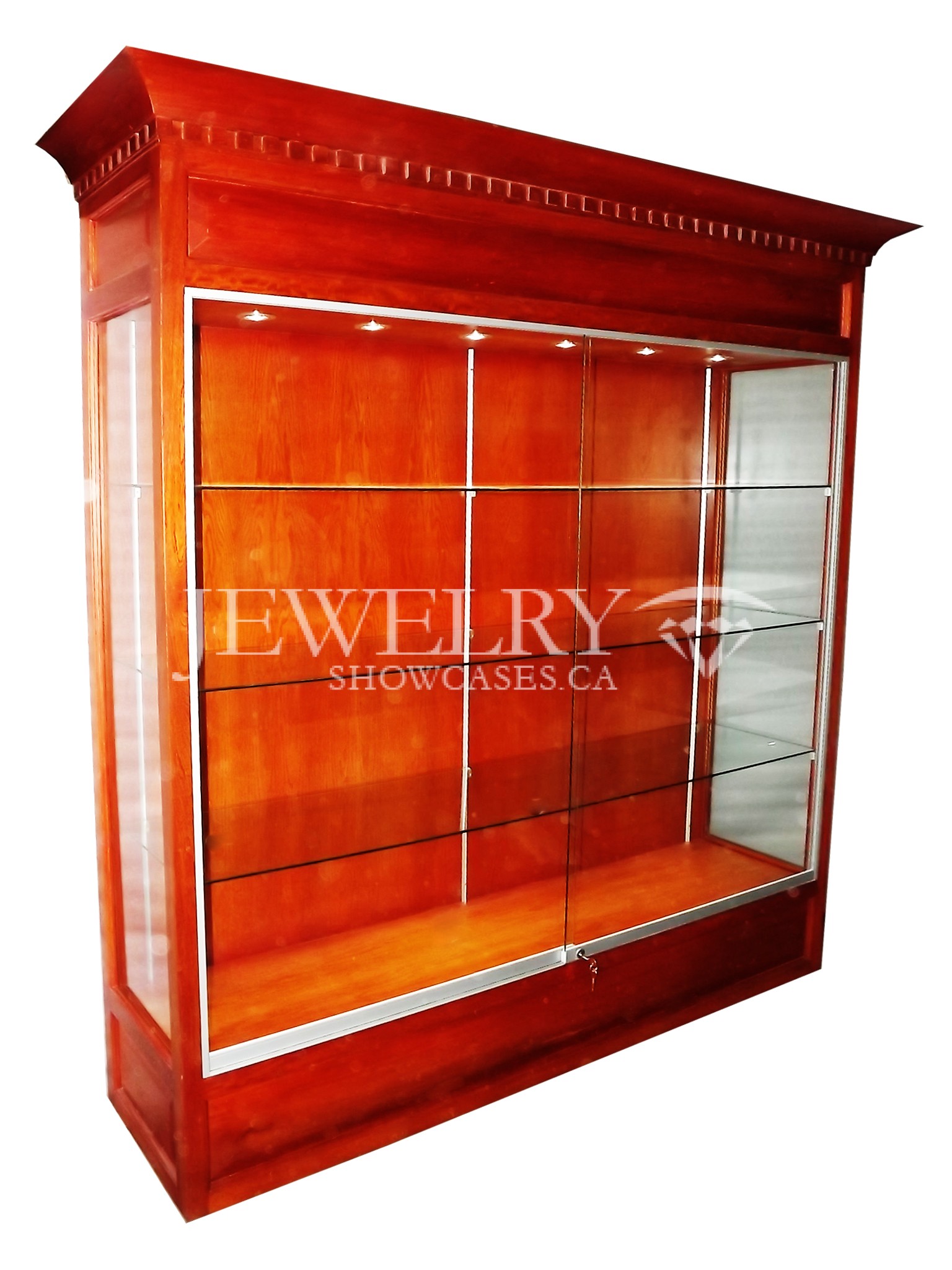 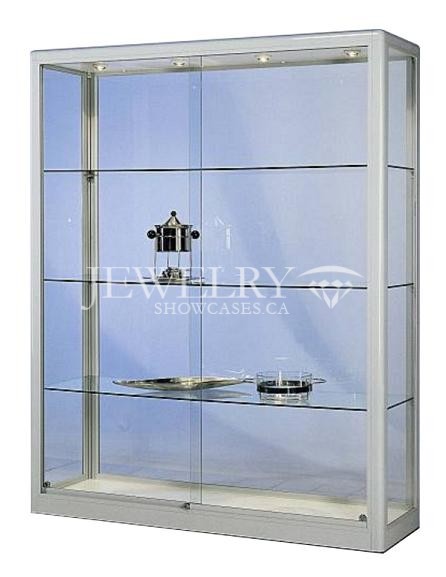 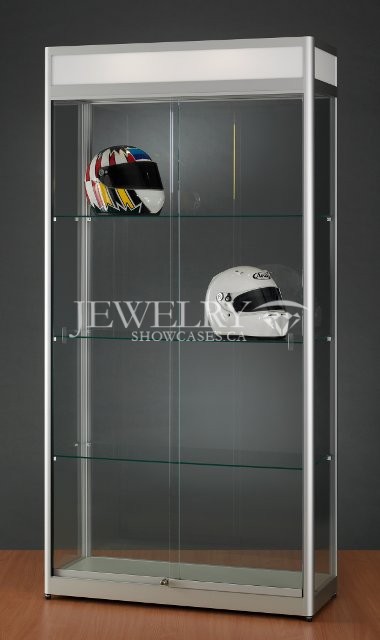 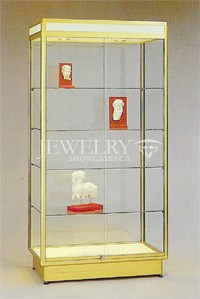 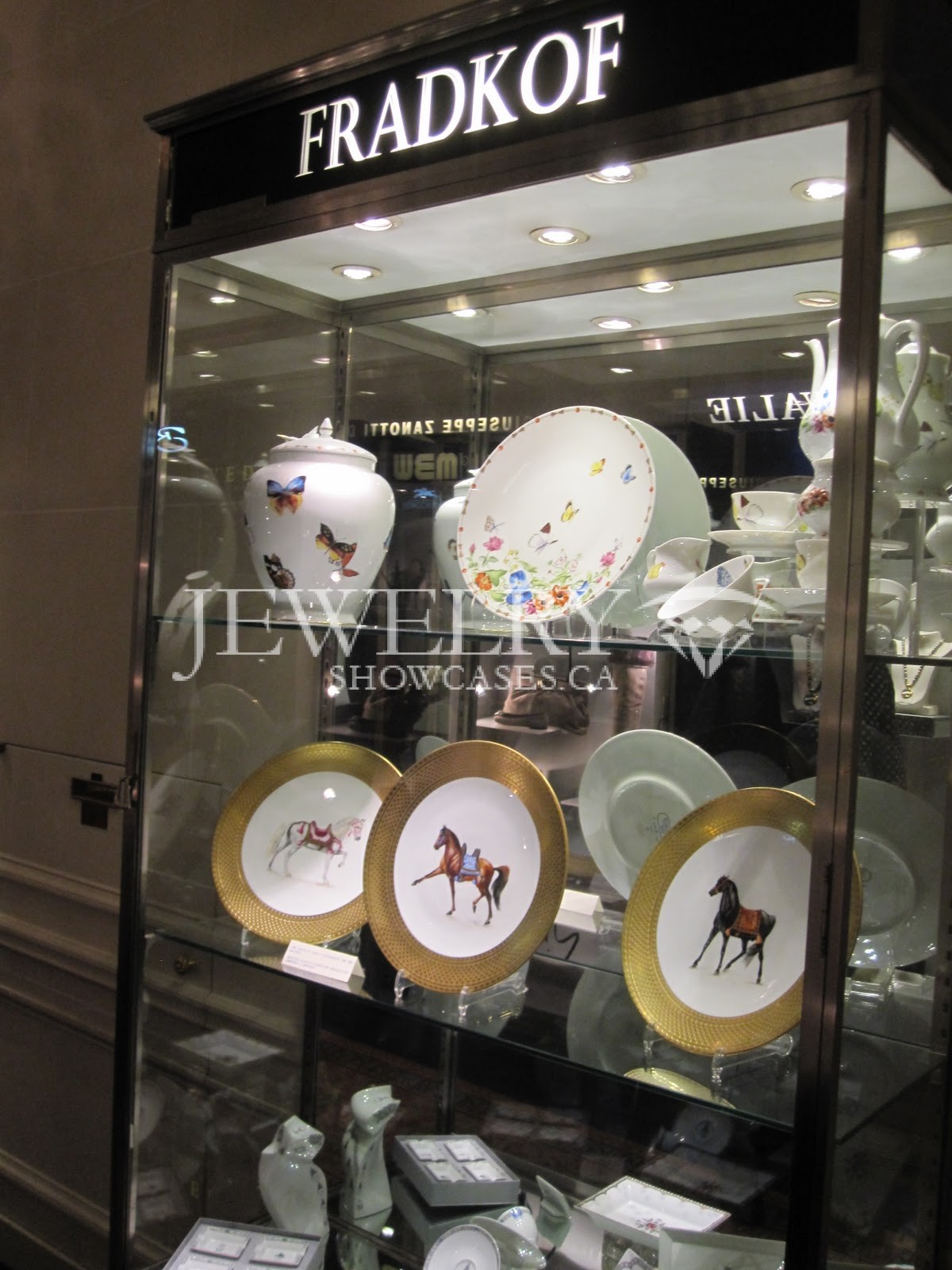 We will be building four of these pedestal display cases for our customer in Toronto this week.